If at first you don’t succeed, try again….and yet AGAIN!

This months challenge is the Holly Swirl named after Holly from Missouri River Soap who created this swirl technique.  It is also called a swirl within a swirl. The technique looked easy enough and I was really excited to take on this challenge.  I thought is was going to be fairly easy peasy.  Uh huh, well I did two attempts at this soap.

I used a fragrance oil called Juniper Breeze from Bramble Berry that I have never soaped with before.  This is never wise as you don’t know what is going to happen and you hope for the best.  I used neon purple for the base colour and wanted to do a neon blue and yellow swirl.  For this batch it wasn’t the fragrance oil that was the problem – it was the soaper, aka, me.  I wanted to keep my soap batter fairly thin and I thought it was at the perfect consistency.  Well my blue and yellow swirls turned green and basically turned into green globs in the bars.

When I cut the bars the next day I summed it up that my batter was way too thin and I would try again with a thicker batter.  This is the video and pictures of the first batch. 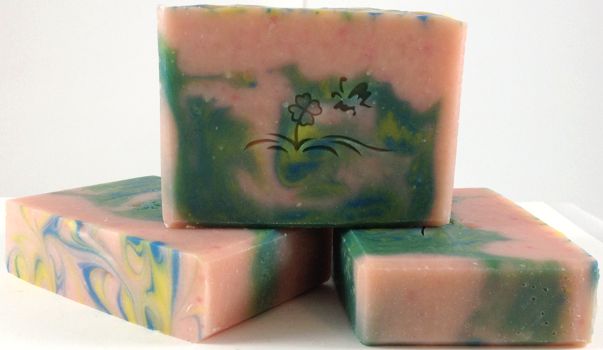 https://www.youtube.com/v/XEjTfUwfQ_U?version=3&f=user_uploads&c=google-webdrive-0&app=youtube_gdata
Second Batch:
Again I decided to use another fragrance oil that I have never used before – Rice Flower & Shea from Bramble Berry.  BIG MISTAKE!!!  My batter basically thickened as soon as I added the FO.  Now what?  Well I ended up spooning and glopping it into my swirl bowl.  As I am doing this I am thinking – how in heck am I going to pour this into the base colour?  Yeah well I ended up spooning my swirled mixture into the base colour that was already in the mold.  Of course it was just getting thicker and thicker.  My swirled colours started mixing together and turning a little brown – nice!  Now having said that, I am actually ok with how the bars turned out overall – considering everything that the poor soap batter went through. 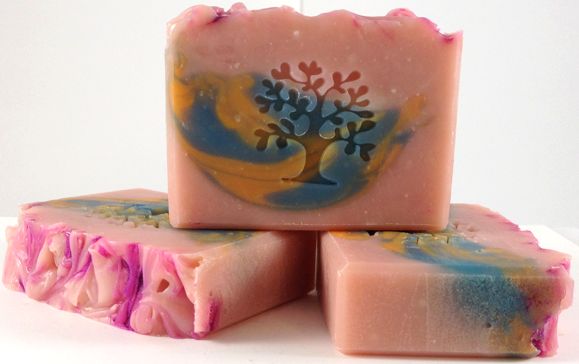 https://www.youtube.com/v/AdVZnMZbERY?version=3&f=user_uploads&c=google-webdrive-0&app=youtube_gdata
Overall, I know the first batch was too thin and the second batch was way too thick.  I would like to attempt this swirl technique again but I will use a fragrance oil or essential oil that I am familiar with.